It’s undeniable, we have encountered the common issue of dealing with your mobile device when it’s slowly dying. When you’re at home, its never an issue as you can easily just grab a new cord, plugin, and save your device from dying. Although once you’re out and about it becomes a new challenge of dinging an outlet, a cord, and hopefully avoiding the back screen of death that every mobile devises user hate. Since smartphones have become the norm, the battery life of these devices has always been in question and manufacturers are finally listening and are changing the game to increase the battery life hopefully.

Why Has This Area Been Lagged In?

This is typically not done on purpose as you must take into consideration a few other factors. Such as design for example. Apple and Android devices have always tried to push the sleek, sexy, and thin device body which makes your mobile feel as if it can fit anywhere without hassle. A thicker smartphone simply has the space to handle a powerful battery while thinner phones are forced to make do with a thinner battery. 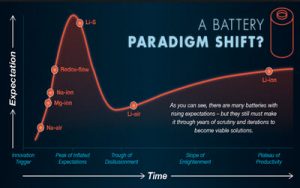 Secondly, smartphones have been made to be as efficient as possible, meaning that they are laced with all sorts of features to enhance the usage of them. For example, IOS devices have a plethora of additional features on to pf the needed apps, which takes up battery life even faster when you are constantly using it. Plus, having a display that is vibrant and fast responses takes up even more battery life than originally thought. Lastly, the battery’s that are used in smartphones have not seen a major upgrade in the last three decades. While the technology does get upgraded to fit newer models, the capacity is always going to be limited due to the size and its capabilities – which doesn’t really fault the smartphone creators.

What are manufactures Trying to do?

No matter the provider of the smartphone. Apple, Android, Windows or some other third-party option. Solving the battery issue is always going to prove to be a challenge due to the previously mentioned reasonings above. Smartphones and batteries will always have a complex relationship as the bigger battery means a thicker phone must be created. Or keeping the sleek look means that the battery will always be limited in some way.

Although, this is not limited to your smartphones, as tablets and laptops face the same issues at times. It isn’t likely that one provider is going to magically come up with a solution to the problem in the next few years. You can make simple changes to help increase the longevity of your battery life. The main one is to look at which apps and services are taking up the most power and slow down your usage of them while you’re out and about. Plus, turning on any additional power saving modes may prove to be useful as they automatically will have the same effect. Or simply just bringing a portable charger that has enough power to charge a laptop can prove to be helpful as you won’t have to worry about the issue too much in the first place.