When you buy smartphone today, it can run one of two operating systems either Google’s Android or Apple’s iOS. They account for 99.8% total smartphones produced and delivered to customers while the rest is Windows Phone of Microsoft.

These two platforms are excellent so almost people like and get used to interact with them. In general, both operating systems have common and some important differences to make unique themselves. So android or iOS has the best platform? We will discuss it in the following article.

We will compare them in several categories then find the winner for those categories.

In terms of pricing, Apple is always in the high top, especially when they launch a new iPhone. For example, iPhone X has been sold at $1,000 and iPhone XS Max is $1,100 in the first welcome to the market. The fact that, it’s not easy for everyone to own a new iPhone as soon as it is publicized.

While Android has scale and variety about other price level for your option. For example, Google’s Pixel 3 XL and Samsung’s Galaxy Note line has familiar price to iPhone. But it has also huge good choice for low-cost. Actually, the market and customer of Android are available for the budget-conscious.

According to the number from two operating systems as below:

Although IOS has lower rate, it has more lucrative platform for developers. Almost app on iOS apps has to pay by money whereas the Play Store has more free apps. So, new apps still land on iOS first.

Whereas Google Maps becomes more popular with unsurpassed the scale and quality.

In 2008, the first iPhone was publicized by Steve Jobs who is CEO of Apple. From this event, as a rule, every year, Apple have introduce a new version of iPhone. Until now, the latest iPhone is XR with many novelty functions.

Inspiration from the iPhone XS and iPhone XS Max, iPhone XR takes strengths from the previous version and adds several caveats. It looks nice and colorful. The iPhone XR is an amazing combination of the best high-end features. Although it is not cheap, the value is great and reasonable when you are considering how smart phone is stable with good camera and famous brand. 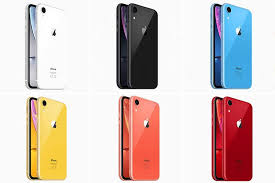 On iPhone XR, there is only a camera on the back but it is capable to get high-quality pictures or video.

The frame is very thin and made from aluminum. It looks stable plastically.

About size, it is middle between the 5.8-inch iPhone XS and 6.5-inch XS Max so with 6.1-inch screen size, you handle or bring it more suitably.

One outstanding feature is for glass. This iPhone is designed with 2 pcs of grass, both the front and the back. So it looks curtained and luxury for using. It means you have many options to choose phone covers with other patterns and styles.

About screen, iPhone XS is assembled by LCD. So someone claims about quality of LCD screen because it can lack the punchy colors and perfect blacks, especially it can’t support for Dolby Vision/HDR10 as other luxurious iPhone. But actually the bright is still pleasant. Sure that you can’ spot individual pixels normally.